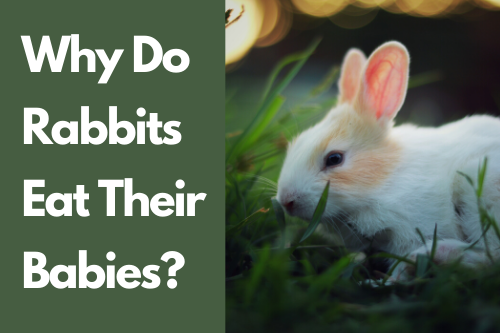 Rabbit does have a short gestation period of about a month, plus they usually give birth to many bunnies at once, with the number of baby bunnies in one litter ranging from 1 to 14.

Also, does give birth up to 10 or even 12 times in one year. Seeing a doe with her litter is quite impressive, as the sight is usually an adorable and beautiful one. What may not be so cute or endearing is seeing a rabbit eat its young ones.

In fact, it can be quite distressing and disturbing to you to see rabbits eat their babies. Also, this behaviour will make it very difficult to breed such a doe, so it is something that you should do your best to curb.

Eating of young ones is somewhat common among animals, even though you may not understand or relate to it.

There are different suggested reasons why rabbits will do this, and once you suspect the reasons for your rabbit’s behaviour, you should be able to prevent it from killing its young again.

Reasons Why Rabbits Eat Their Babies

If you have ever come across this scene, the chances are that you will want to know why your rabbit carried out this act and what you can do to prevent it from doing so again in the future. Here are some possible reasons why your rabbit may be eating its babies;

Rabbits are not carnivorous by nature. Therefore, a doe would not see her kits as a ready meal and eat them without reason. A good indoor rabbit hutch is a good thing to have when your rabbit is with its young babies.

Most rabbits that eat their own babies are usually young first-time mothers. The fear and confusion that the rabbit is facing from the experience of birthing the kits may prompt her to follow her natural instincts and eat some of them or even all of them.

The act of eating up young ones is probably more common in wild rabbits than in domestic ones. In the wild, rabbits always face the danger of being consumed by predators.

Wild rabbits are usually small in size and are easy prey for larger animals. They are flight animals and timid creatures with senses that are well developed to avoid their predators. Therefore, if they are in danger, and cannot avoid predators, they’ll take flight.

For this reason, a female with several kits will eat them up to escape a predator, rather than be captured. It is also highly likely that a doe would already be pregnant with the next litter if she has young kittens. Killing the kits will enable her to survive and give birth to the next litter.

As for domestic rabbits, even though no predators are endangering their lives at home, they already have this nature inbred in them, and so, you may find your pet eating its young.

It is also believed that a doe will eat her young if she thinks that they are sick in a bid to reduce their suffering. She may also do this so that weak and defective bunnies will be eliminated and the strong ones will survive.

Rabbits can also be territorial, after going through the pregnancy phase. A doe that is feeling this way may be reluctant to share her hutch with her young ones and will eat them off to avoid competition.

Other possible reasons why a rabbit will eat her young include nutritional deficiency; she thinks the kit is not going to survive, or she is stressed and afraid.

How Can You Stop Your Rabbit From Eating Its Babies? Seeing your rabbit eat its kits is not pleasant at all. This is especially true of a rabbit that you are breeding. There are some things that you can do to stop your pet from eating its young ones.

Since a major reason does eat their kits is because of their instincts and stress or fear, you can try to combat this instinct by providing a safe and non-threatening environment for your pet.

Try to find out if anything is threatening the animal and get rid of it. To make your doe feel more secure, you can provide a dark hiding place in her enclosure where she can go with the kits and feel safe.

If you have done everything you need to do to isolate your rabbit, but she still eats her baby bunnies, then you should separate her from them.

It would be best if you did this until the kits are a little older, about some weeks old.

Before separating them, get a comfortable nest box for the kittens. You should get one with a door to keep the doe out of the best box. Since the kits are still too young, you should let the doe feed them twice a day, but you shouldn’t leave her alone with them.

Giving birth to a litter can be a stressful experience and will take a toll on a doe, especially if it is her first time. Also, motherhood and its responsibilities can be overwhelming to your rabbit in the same way that it is overwhelming to human females.

This stress and responsibilities can result in your doe eating some or all of her kits.

It would help if you tried to relieve your pet’s stress by distracting her. You can distract her with toys and food as these would help to keep her mind off her litter.

Does that are nutritionally deficient will eat the placenta after giving birth, and may accidentally eat a kit while doing that. It would help if you fed your rabbit with Alfalfa hay some days before she has her litter to help replenish nutrients in her body.

Some experts (1) believe that stress in a rabbit that recently had a litter or a pregnant doe can be relieved by giving her extra calcium. Therefore, you should try changing your rabbit’s diet and adding more calcium to it. Final Thoughts on Why Rabbits Eat Their Young

Most times, a doe will not just up and decide to eat her litter. The factors discussed above will usually have a hand in making her exhibit this behaviour. Therefore, it is not very common to see a doe eat up her entire litter. A more common sight is a doe eating one or two kits.

If you are faced with this problem, you should watch out for stress signs in your doe, and deal with them according. Distracting your doe with toys like chew sticks will also help a great deal in occupying her and reducing stress.

This way, her attention will not be so focused on her kits, and with her attention divided, the doe may not be so interested in eating her litter. If all these tactics fail, then you should separate the kits from their mother, particularly if they are still very young. However, newborn rabbits need their mother, and so, you should allow her to feed them under careful supervision.

Breeding a rabbit that keeps on feeding on her kits can be very difficult if she keeps eating them up. With the above measures, you should be able to prevent your doe from eating up her young ones. After she has bred several times, she will be used to the process and will most likely stop killing her kits.

However, this is not always the case and so, if you have tried all the possible ways to stop your rabbit from killing her kits, but nothing seems to be working; you may have to give up breeding the animal. It would be best if you spayed her, as it is clear that she is not cut out for motherhood.