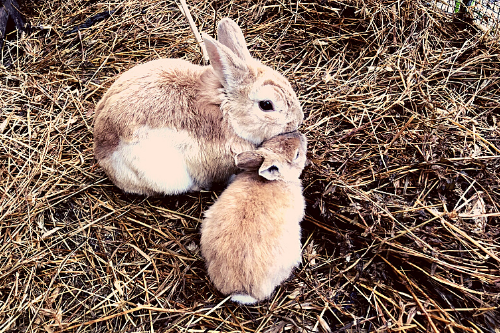 Just like any newborn, baby pet rabbits start off small, fluffy, and cute. But from when they are weeks old to the first years of their lives, they grow quickly. The point in which your pet rabbit will stop growing will depend on its breed, genetics, and diet.

So when do rabbits stop growing? Rabbits tend to stop growing and reach maturity at different stages and ages depending on their breed. Some of these rabbits, like the Netherland Dwarfs, attain adult size by at least 4-5 months old. Some other rabbit breeds, such as the Flemish Giants, may reach adult size in at least 18 months. Other rabbits like the medium-sized ones reach their adult size between 6 and 10 months.

Let’s take a look at a few of the most popular house rabbit breeds and what age each breed reaches adulthood. We will then proceed to evaluate the different factors that can affect how big a rabbit can grow and how rabbits live.

When Really Do Rabbits Stop Growing?

If you notice, most rabbits that are for sale at pet shops are mostly baby bunny rabbits. These baby rabbits are separated from their mothers at roughly around 2 months old. These baby rabbits are then sold to pet stores, who later sell to potential pet owners while they are still in the developmental phase, and have not reached maturity.

When rabbits are 2 months old, they usually require extra protein and fat in their diet, which helps them grow. These proteins and fat needed for their rapid growth can be found in alfalfa hay, when they a consume a considerable amount of alfalfa hay, they will grow more quickly. As stated before different rabbits attain maturity at different ages depending on their sex and breed. For example, the male New Zealand rabbits start producing viable sperm by the age of 6 months which is a sign of maturity. The female species of this breeds can take longer to mature, while smaller breeds may mature earlier.

But bear in mind that bunnies can continue to increase in size even when they are sexually matured. As for domestic rabbits, they aren’t considered adults until they are a year old.

Most rabbits may stop adding weight immediately after their first birthday, although some breeds of rabbits reach their maximum size much earlier and faster, while other breeds may keep on increasing in size even after reaching maturity.

How Big Can Rabbits Get?

The size of a rabbit at adulthood can vary depending on several factors. Some of these rabbits can be as small as soccer balls or even smaller, while others can be as big as a medium-sized dog.

Factors that can affect the size of a rabbit include;

In as much as all domestic rabbits are of the same species, their breed can greatly alter their size while growing. For your information, dwarf rabbits are the smallest, they rarely grow bigger than 4Ibs but some larger species of this rabbit can exceed 20lbs.

Even amongst the same breed of rabbits, some of these rabbits will likely grow bigger than others, strictly because of genetics. A mother rabbit with small body size and stature will most likely pass on this genetic trait to their young ones.

The way you care for your rabbits can ultimately affect how big they can grow. Their growth can be stunted if they are not treated properly. As mentioned before, for rapid growth and development, young rabbits need to consume a considerable amount of alfalfa hay and pellets.

Be careful when feeding them with this hay because a little too much can lead to obesity in your rabbit’s.

It’s really not ideal to measure the size of a rabbit in inches, and also taking the measurements of your rabbits can be difficult, especially when they are running around the place. So its better and simpler to compare rabbits of the same breed based on weight. When do Rex Rabbits stop Growing

As we all know, Rex rabbits are a popular breed of rabbits, that are well known for their dense and velvety fur. They are characterized by long upright ears (1) and they come in a variety of at least 30 different coat colours.

They originally originated from France but have now become a mainstay in the U.S. and U.K.

There are basically two varieties of Rex rabbits – they are, the standard Rex and the Mini Rex. Both varieties look alike and basically have the same temperament.

The unique difference between the two breeds of the Rex rabbit is their size. As the name implies, the mini rex rabbit’s are a lot smaller than the standard rex rabbits.

Standard Rex rabbits are classified as medium-sized rabbits. On average, they weigh between 7.5 and 10.5 pounds as adults. They attain full-body development between 8 and 9 months of age.

The Mini Rex breeds have an average weight between 3 and 4.5lbs as adults. They literally stop growing in size between the ages of 6 – 7 months.

When do Dutch Rabbits Stop Growing

The dark half also extends to their ears and eye regions, with a line of white running through the middle of their faces. The dark markings on their bodies can have various colours which include chocolate, black or grey. They are a sight for sore eyes in most pet shops and are always a good choice for a pet rabbit because of their calm temperament. However, because of their gentle nature, they should not be given to children as pets.

Dutch rabbits can be classified as a small to medium-sized breed. They don’t appear as small in size as the dwarf breeds but they don’t grow as big as most medium breeds of rabbits, for example, the Rex rabbits. They often weigh between 1.5 to 2.5 kgs as adults, and will only achieve this weight within 6 to 7 months.

When do dwarf rabbits stop growing

The breed of rabbits, by name the Netherland dwarf, are one of the smallest breeds of domestic rabbit in existence. They have their origin from the Netherlands and were originally bred from a rabbit that had a genetic mutation causing dwarfism.

They are also easily recognised by their short skulls and tiny ears (2). They are also very common as pets in most domestic houses. They are very lovable, they don’t occupy much space in your house, and they are sociable and trainable.

However, due to their small nature, they do not make good pets for children.

Now, when exactly do these Netherland dwarf rabbits stop growing?

The peak adult size of this breed of rabbit is 4 pounds. Some species of this can even weigh as little as 2 pounds, maybe due to genetics or other reasons, but many can weigh up to 3 pounds.

They have early maturation levels and can reach their full size at roughly 5 to 6 months.

These rabbits have both small and medium-sized species. Smaller species will keep growing till they are about 4 – 6 months of age, while for medium-sized rabbits of this breed, it may take up to 10 to 12 months to achieve full-body size as adults.