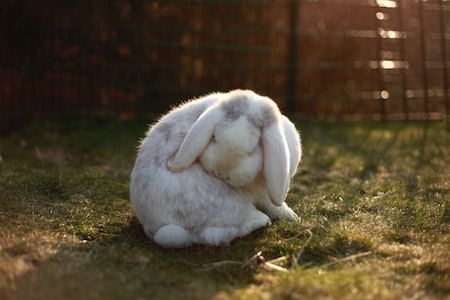 ”But you look so cuddly and soft, what do you mean you don’t like being held?!”. It is easy to pout and truthfully, frustrating when you carry your pet rabbit and they try to make run for it. However, if you view handling from the rabbit’s point of view, you’d probably detect any physical touch.

Rabbits have not always lived with man, instead, they live(d) in the wild and as small animals, they are obviously considered food by the bigger animals. To increase their chances of survival, they prefer to stay on the ground where they can easily make a run for it if danger is sensed.

Even after spending a year with humans as house pets, they still feel uncomfortable and strained when being held. So now you see that your rabbit doesn’t hate you, it just has a bit of Post Traumatic Stress Disorder (PTSD), though it might have never lived in the wild. Intriguing, right? 98% of the time, the instinct to run and kick when being carried is inbred. This paranoia is also exacerbated if the rabbit has negative experiences or didn’t experience socialisation as a child. When the rabbit twists her body and violently kicks her giant hind feet, she is beyond scared and needs to be dropped ASAP.

For you to seek answers about this, you must have tried multiple times to carry your rabbit without much success. Therefore, you know now that continuous carrying wouldn’t ease up rabbit but would rather make her more peevish.

How to Handle Rabbits

As much as you should lay back on holding pets, there are some situations that require you to move the animal from a point to another. Be it a trip to the vet, keeping the rabbit out of trouble, giving her medicine or simply just placing her in her hutch, you would need to carry the animal.

This would be no easy task if she runs in the other direction when she sees you approaching because she knows you would try to carry her. To regain her trust, you must be patient and knowing.

Follow these steps for a struggle-less pick up of rabbits

What rabbit breed likes to be held:

Some rabbits are docile, playful, less peevish and truthfully, lazier than the rest. For these breeds, being carried and picked up is not an issue, in fact, they like it. However, do not forget that they are still rabbits and as such, they may require space even in the middle of a cuddle. Let it be. When it feels like itself again, it would come around. Don’t push it. Mini lop: Their small size, lopped ear and pudgy coat make them look so painstakingly cute to the point of cuddling. Luckily, they are usually happiest when held and pet so you can definitely give in to your urge. Their good temper makes them a good pet for children.

Chinchilla Rabbits: Since their arrival in the 1920s, they have been household pet known for their good temperament and their tendency to be adorably sweet, even when being carried and held. They are big in size so be sure that you can support their weight.

Dutch rabbit: Recognizable by their inverted V-shaped white marking that runs from the middle of their eyes to their muzzle or nose. They are calm, easy to care and enjoy cuddles.

Himalayan Rabbit: This breed has spent long enough time with humans to get used to humans constant want for cuddles. They are patient, docile and easy to carry about.

English lop: English Lop is popularly known for its characteristic big, hanging ear, colourful coat and curiosity. They are gentle, friendly, easy-going and compliant, so yes, you can hold an English Lop for a considerable period of time.

Polish Rabbits: Polish rabbits are small, smart, docile and tolerant. This breed is really fine ok with sitting in a spot for a considerable long period of time, hence, that makes them easy to cuddle and hold.

Harlequin Rabbit: As its name alludes, this lovely breed is not afraid to entertain. In addition to their outgoing personality, their prominent fur is another reason why they are highly sought after. They love attention and are particularly keen to petting and cuddles, they sometimes demand cuddles!

Rex rabbit: They are friendly and quickly form an attachment to their new family. They are minimally skittish, so it wouldn’t take a long period to gain their trust. In no time, you would be able to hold, cuddle and even carry them around. Another added addition to the breed is their velvety and soft fur that comes in 16 different colours.