In general, it is believed that smaller breeds of rabbits reach sexual maturity much faster than their larger counterparts.

So how do you know when a rabbit is pregnant? Like most mammals, a female rabbit’s belly will get larger as her babies grow inside throughout the pregnancy, so this is the most obvious sign of a pregnant rabbit. Aside from the weight gain, pregnant rabbits will begin to eat more, and most will also seem extra cranky or moody. If your rabbit is usually pretty unfriendly though, it may be difficult to tell if it’s pregnant based solely on a mood swing.

Larger and heavier breeds (doe) reach maturity and can get pregnant at 6-8 months, and the buck (male rabbit) reaches sexual maturity at 9 months.

The gestation period (the period between breeding and kindling or pregnancy period) of the adult female rabbits on an average, is 3 months and one day. As soon as the adult female rabbits have kindled, they are now ready to breed again after one and a half months (6 weeks). As a rabbit owner, when selecting your rabbits for breeding, its best you use breeds that have a history in terms of genetics and productivity.

Below is a list of various rabbit breed sizes and their ages of sexual maturity;

Standard or large-sized breeds often become sexually mature at 4 – 4.5 kg of body weight. This also largely depends on the species of rabbits

The period when the average female becomes sexually mature is between 3 to 8 months of age, this maturation age depends on her breed, size, and body weight. She literally can get pregnant at any point in time of the year throughout the duration of her life span. But note that that sex cell production (egg and sperm) diminishes after 3 years of age, and this is based on a report stated by Reproduction Toxicology. 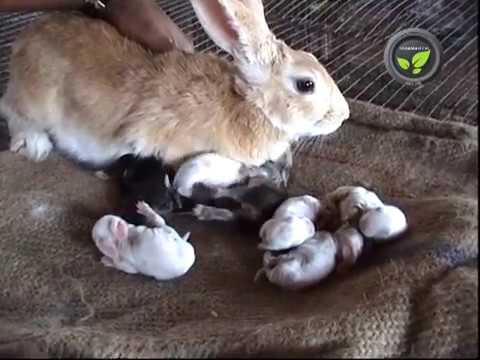 For rabbits, their gestation period is quite short, it ranges from 28 to 36 days, on an average, it’s 31 days.

The number of baby bunnies in a litter can range from 4 to 12 bunnies. If the right conditions are met, adult female rabbits can give birth to up to 60 babies per year. After a single birth, a highly prolific female rabbit can get pregnant again the next day.

But for reasons unknown, the death rates of rabbit embryos are very high. Most of these deaths are caused by trauma, infection, environmental stress, and malnutrition. This goes to tell you that the fertility rate of female rabbits is very important to counter their death rates.

What Age can Female Rabbits get Pregnant?

Normally female rabbits (Does) can become sexually active and pregnant when they are at least 3 months old. These rabbits can continue to give birth to their bunnies up to the age of four years. But as for male rabbits, bucks can continue to produce viable sperm cells and can mate until they are seven years old.

Rabbits are different from most animals, both domestic and wild. They can conceive and have babies at any time of the year, they do not have a particular mating season. This is why most rabbit owners that have males that are not neutered usually keep them separate from the pen, so as to avoid unwanted pregnancies.

Can a Rabbit get Pregnant without Breeding

To keep it simple, it is very possible for a female rabbit to get pregnant without breeding. As long as the doe (female rabbit) has reached maturity and she is stimulated, her reproductive system, particularly the ovaries will definitely produce eggs. In the same vein, as long there is a healthy male rabbit (buck) to produce viable sperm cells to fertilise these eggs, then the rabbit will definitely get pregnant.

There are various reasons why animal advocates ask pet owners to safely spay and neuter their pets, and unwanted pregnancy is one of the major reasons. Most of these pets especially rabbits can be very productive.

Some pet owners also choose to spay and neuter their pets because of health reasons, and also to reduce the number of unwanted pet babies. Most domestic animals like dogs and cats may tend to wander around the neighbourhood every once in a while. These unprecedented trips outside their homes can be very troublesome because some of these animals tend to get pregnant outside, leading to an increase in the pet population.

Now let’s look at how these pet-animals can greatly increase pet population if they are not properly neutered, we will be using rabbits as a typical example because of their high fertility;

Let’s say the ratio of males to females is 1:1 and we know that rabbits can have up to 1 to 14 babies in a litter, starting at only 24 weeks old. If all the babies in the litter survive to adulthood and we consider the fact that rabbits are very prolific, so much so that they are able to get pregnant again within minutes of their first birth, and the fact that the gestation period is 4 weeks, hypothetically, a female rabbit will most likely give birth up to 14 times a year, including the number of times they get pregnant due mating season.

Since the approximate life span of a rabbit is termed seven years, it means that one female rabbit and her offspring could give birth to nearly 185 billion rabbits within the space of seven years – basically from the day they are born to the day they die.

Don’t be too alarmed by this, this is just a hypothetical theory, it has not happened and will probably never happen.

This is just to explain how prolific and proficient rabbits can be when it comes to childbearing. But under normal circumstances where conditions are right, a pair of rabbits can have up to 1 to 42 babies under 6 months.

This, of course, takes into consideration the gestational period of rabbits (1 month), their prolific nature and the age of 3 months where they become sexually active for pregnancy.