One thing is certain, bunnies are social creatures; they love the interaction, the exploration and the attention. If you notice a steady decline in any of the following, it’s time to get a little worried.

The following are several reasons your bunny is lying down all day:

Your Bunny Is Lazy

Even though bunnies are supposed to be energetic and fun loving, sometimes they get to act lazy, especially if they’ve engaged recently in too many activities. When you see them lying down all day, inactive and they’ve had a fun-filled couple of day, they are probably recharging their energy and in no time, they’ll be active again. Another reason your bunny may lie down all day could be a lack of sleep. Bunnies are light sleepers, so if loud noises and distractions interrupted their sleep time, they may be too tired to move about during the day.

Bunnies are alarmed by loud noises; their instinct kicks in and they immediately look for cover-hiding underneath any available shelter. As a pet owner, you need to make sure their resting place is free from noise and other forms of disturbances. Sleep is just as important to them.

Your Bunny Has Overfed

Bunnies love eating, and most times they don’t know when to stop. If they get overfed, they may be too tired to move around. This might cause them to lie down or sleep for most of the day.

As a new pet owner, you might find it hard to regulate their food consumption. You might probably think they’ll stop on their own as soon as they get full; chances are they won’t. Bunnies have large digestive tracts. They can consume a lot of food and as long as the food is there, they’ll just keep chewing. Help them plan their diet and regulate their food intake. Bunnies should eat a lot of hay; grass hay for adult bunnies and alfalfa hay for baby bunnies.

Alfalfa hay could make adult bunnies obese, so if you’re worried, they are lying around all day, be prepared for more of that when they become obese. They should eat at least two times a day; preferably morning and night.

You can substitute their meals with pellets and dark leafy green vegetables. Bunnies don’t play with their pellets, but if you let them eat too much of it, it could be bad for their health. Instead of letting them feed excessively, you can get them chew toys or distract them with games and playful activities; the exercise is good for them. If you need help with their diet, you could ask your veterinarian for a meal plan for rabbits, this could make the job easier.

Your Bunny Is Isolating

If your bunny is stressed out, yearning for furry companionship and completely disinterested in people watching, it might start to isolate itself. When you notice your bunny hiding under weird places and just mopping all day, it could mean that it is bored with its routine and needs a break from it. Give it the space and time it needs. Regularly check in on it apart from meal time to see if there are changes. If it takes a while and still no change, try engaging it in new activities and see if there are improvements. If you still notice this disinterest, then maybe its time you introduced it to some other furry animals. The new thing is observation and trying to listen for what the bunny might need at the moment. Accurate discernment will definitely bring about positive change.

Your Bunny Is Sick

Sometimes your bunny isn’t just lazy, or lonely or overfed. Sometimes, it’s lying around all day because it is sick. Maybe it hurt itself while playing, swallowed an object or has food poisoning. If you notice your bunny is lying down more than usual, and its not eating or pooping, or when it poops; it doesn’t feed on its poop pellets, or the poop is abnormally shaped, or your bunny squirms when you try to carry it or cuddle it, it could mean its sick or is in pain.

You have to take it to the doctor immediately. You have to pay attention to warning signs, one of which could be general weakness of the body, causing them to lie down all the time. Also, if your rabbit is having a heart attack; it could go very still after an initial shriek. If your sick rabbit is left unattended, it could die. You should always observe your pet. A rabbit’s health is usually very fragile.

The key is observation. Often times you’re the only one who can actually know how to help your bunny, probably because you spend the most time with it so you are familiar with what’s normal and what isn’t. 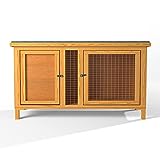 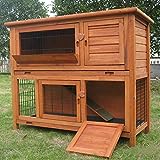